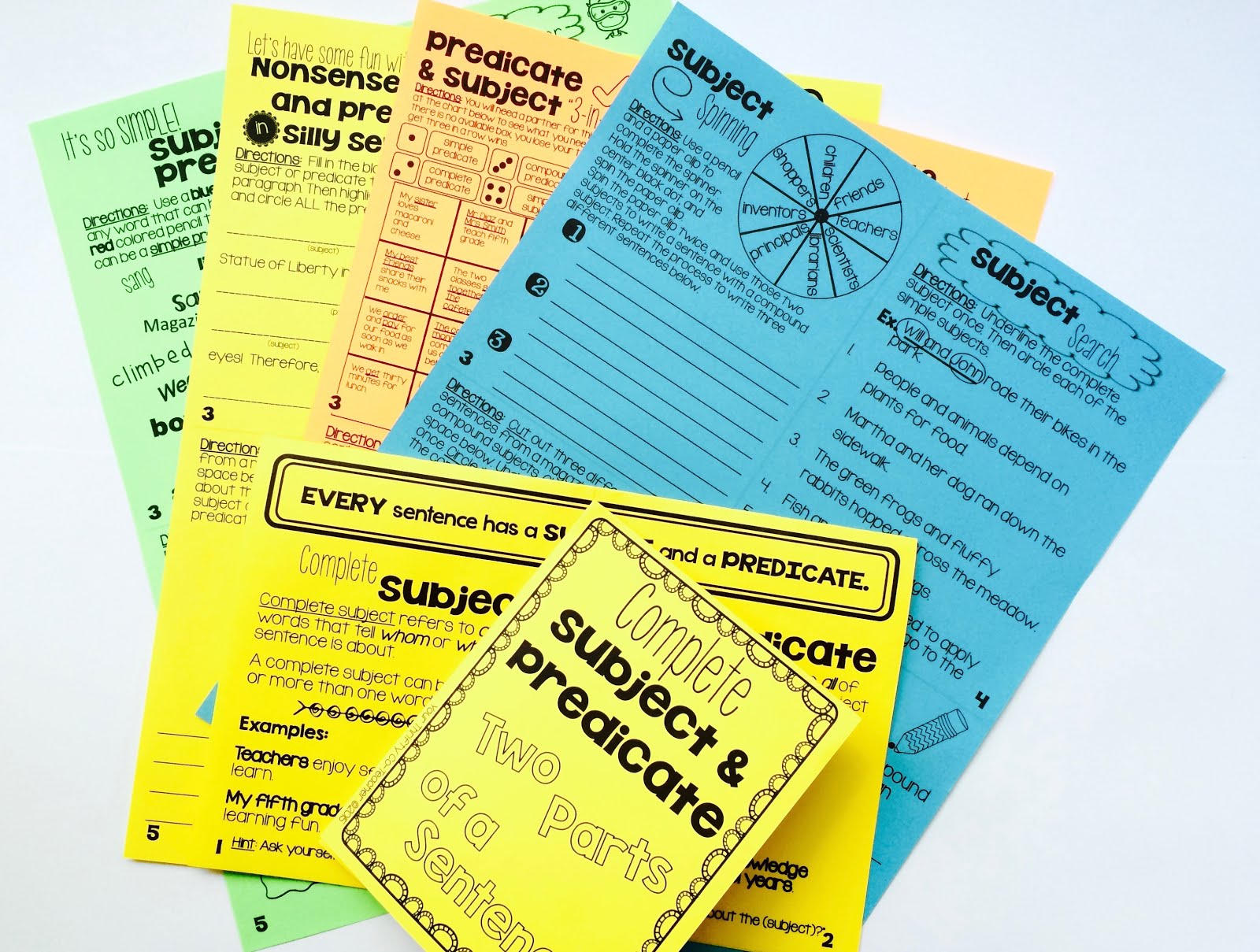 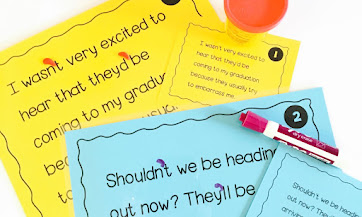 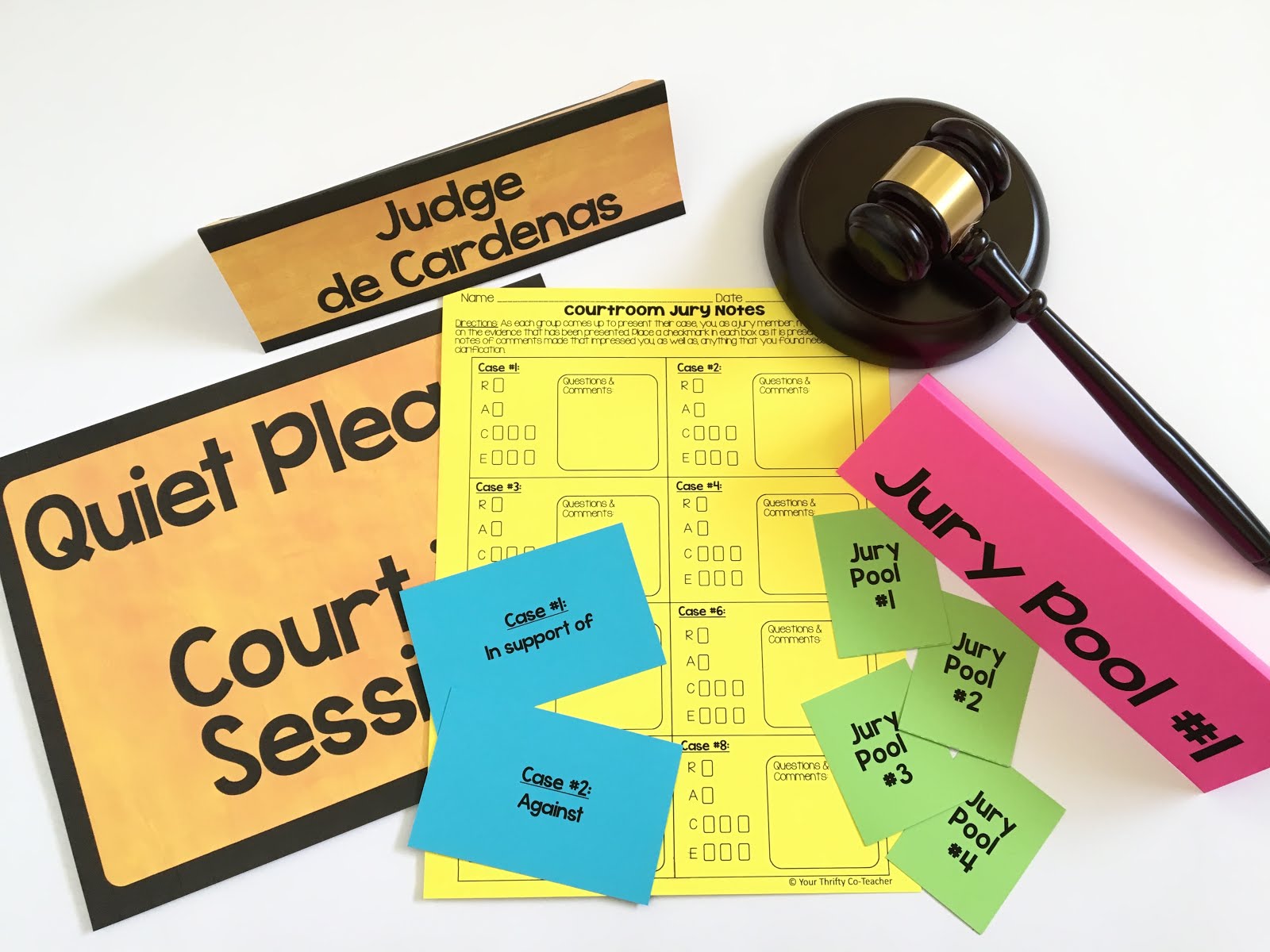 Back to School, Grammar 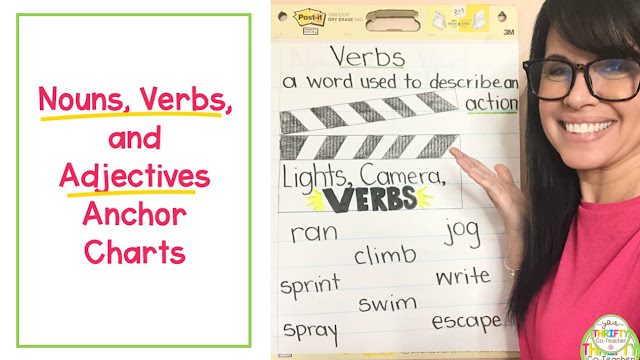 Reviewing nouns, verbs, adjectives, and other parts of speech with students at the start of the school year can save teachers a lot of frustration later on. This is most apparent in upper elementary classrooms where students will be diving deeper into different categories of nouns, pronouns, verbs, adjectives (such as comparative and superlative adjectives) and more.
Taking the time to go over these parts of speech does not have to be complicated. A few anchor charts and a couple of activities will remind them of the terms and what they mean.
Here are samples of nouns, verbs, and adjectives anchor charts and activities you can use with your fourth and fifth grade students to refresh their memory on these parts of speech.
(Side note: I am including an affiliate link to the sticky anchor charts I display throughout the post in case you are interested in them. You can grab them at Amazon or at most other office supply stores. The ones I used do not come with lines. I drew them myself. 😉)

Beginning with nouns is the most logical place to start since simple sentences begin with a noun in the subject. Reintroduce what a noun is, then discuss the difference between a common noun, proper noun, and pronoun. This can definitely be confusing but some simple explanations and an anchor chart will do the trick. 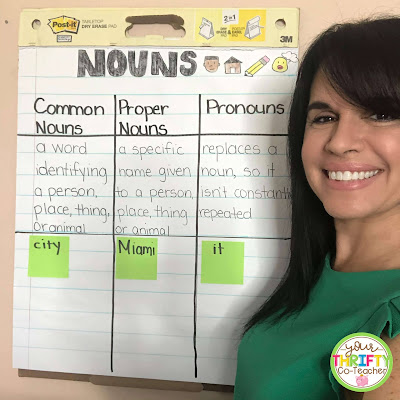 Explaining to the students that a generic noun such as dog is a common noun and being 'proper' by calling the dog by its name is a proper noun (while using a sophisticated accent when speaking) helps them remember the difference. I also emphasize how it is easy for a reader to identify what a proper noun is because it is capitalized within a sentence.
As for pronouns, we discuss how they are "pros" at substituting for "nouns." These nouns also keep you guessing because they do not give you too many clues as to what they are without context. For example, if we say "it," we could be talking about almost any "thing." It could be a dog, a pencil, an airplane, or many other things. This substitute is used to replace a noun that has already been stated, so the writer does not have to continue to repeat the noun.
"We Do"
Begin with a three column nouns anchor chart. Number 'Common Nouns' #1, 'Proper Nouns' #2, and 'Pronouns' #3. Hold up a sticky note with a noun on it for students to see. Have students show which one of the categories they think it belongs in. They should hold up one finger, two fingers, or three fingers to correspond with the columns in the chart. 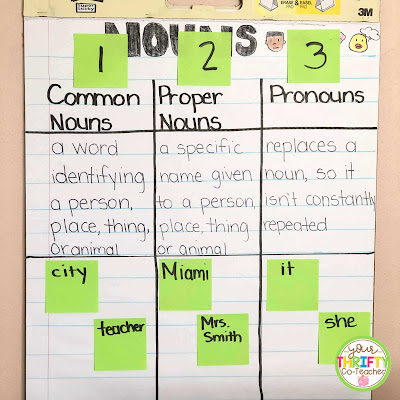 "You Do"
As an informal assessment, I distribute a sorting activity via Microsoft Teams. It was created using Powerpoint for easy distribution through email, Google slides, and Teams. It is a three column table with word cards at the bottom that students would drag to the correct column. This activity can be done very easily in a notebook. Students can create a three column table, and you can provide students with a list of nouns that they write under the correct column. Because every sentence must also have a verb in order to be a complete sentence, reintroducing verbs next in the sequence would be a good next step. Although there are a few categories of verbs such as linking verbs and helping verbs, reminding students that verbs are actions is a good place to start.
Using a verbs anchor chart to review or reteach verbs helps support different types of learners; visual, kinesthetic, and auditory. 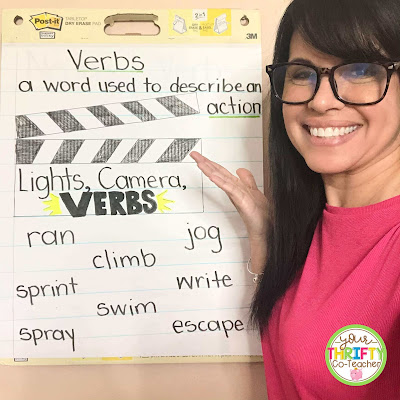 "We Do"
As you discuss what verbs are, engage students by having them act it out. I like to start with a 'Lights, Camera, Action" clapboard. We substitute the word "action" for verb, then begin to act out different actions adding them to our anchor chart. 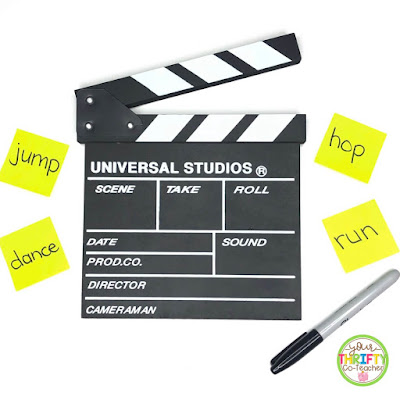 "You Do"
Just as in the previous activity, having students sort words is a great way to have them practice distinguishing between nouns and verbs.
You can have students create a two column chart in their notebooks, present them with a list of nouns and verbs, and have them write them under the correct column. It is a good idea to include the three types of nouns you previously reintroduced.
I created a digital version of the chart since we are working virtually, again using Powerpoint. 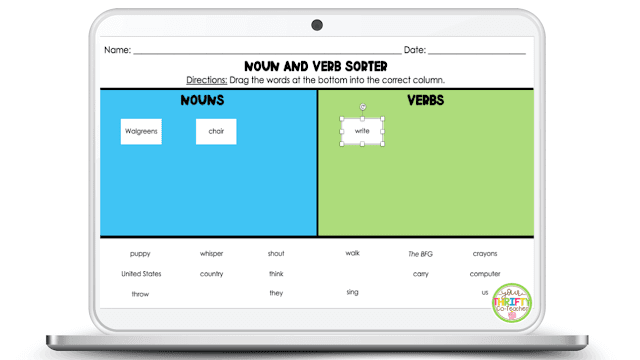 Reintroducing adjectives will look different between beginning 4th graders and beginning 5th graders. The standard for adjectives previous to fourth grade discusses how adjectives describe a noun and focuses mainly on numbers, colors, size, shape, and opinion. In 4th grade, students are introduced to the standard of ordering adjectives and are taught that origin and materials can be used as adjectives.

For the 4th grade anchor chart, I used the acronym S.O.N.S. to help them remember some of the basic categories of adjectives. We also discus that color can be an adjective, but since those are pretty straight forward, we concentrate on what constitutes a "size," "opinion," "number," and "shape." 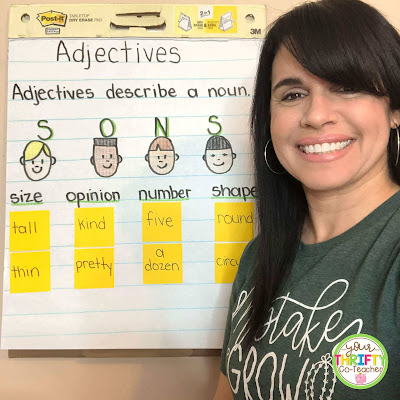 Sample 4th Grade Anchor Chart
For the 5th grade anchor chart, we focus on the order of adjectives. We like to say that "No Sassiness" is allowed when it comes to adjectives, hence the fake website nosas.com. Yep, sass should have two "s," but the fun nature of our acronym helps us get past it really quickly. 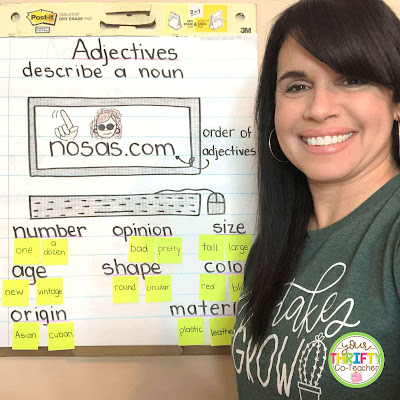 As part of the "we do," we share different adjectives and add them to the anchor chart using colorful sticky notes. I like to use sticky notes not only because it makes the words stand out but also because it allows me to reuse the chart.

Just as in the previous two activities, having students sort words is a great way to have them practice distinguishing between nouns, verbs, and adjectives.

Students can once again create them in their notebook, or you can assign a digital version to them. 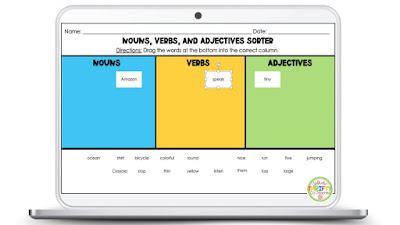 If you'd like to receive the digital resources in your inbox, sign up below, and they will be sent to your inbox after you confirm your email.

I hope these nouns, verbs, and adjectives anchor charts and activities give you some inspiration for reviewing parts of speech whether you are working virtually or in person. 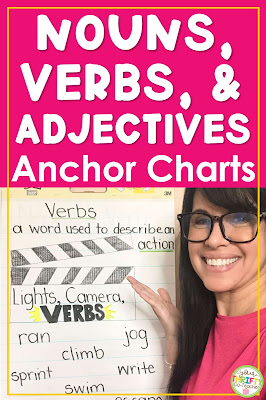 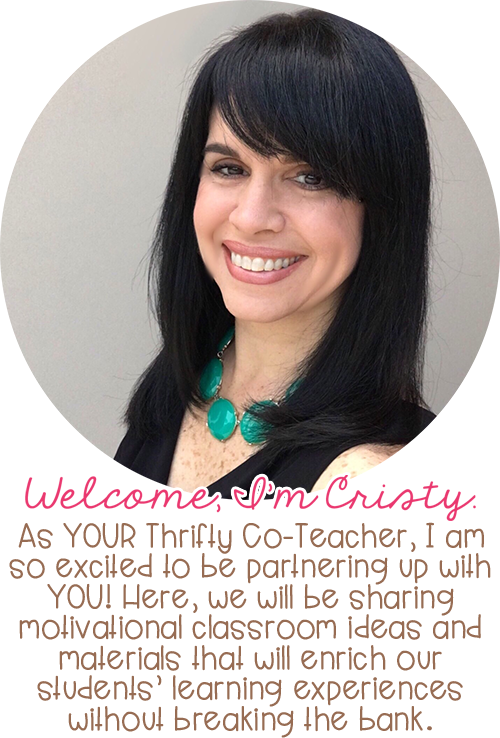